"MERCY AND TRUTH SHALL GO BEFORE YOUR FACE"

St. Nicholas is one of the most popular saints of Christianity. Even St. John Chrysostom, whose Holy Mass is always celebrated is not more popular. Why is that? Two qualities of the great hierarch could explain it:

- His sacrificial love for people; and

- His love for Jesus - the love of Truth.

Constantine the Great found Saint Nicholas in prison. By the emperor's edict recognizing Christianity as the state religion, from the year 313, St. Nicholas, together with all the Christians from the dungeons of the Roman Empire, were liberated.

In 325, when Emperor Constantine summoned the first Ecumenical Council of all Christianity, Saint Nicholas was among the 318 Holy Fathers and hierarchs of the world.

The Synod was summoned to stop the great heresy of Arianism, which negated the divinity of Jesus.

Saint Nicholas ardor for Truth was then made known. His zeal even went to the extreme. In the middle of the Council, St. Nicholas slapped the heretic Arius for his blasphemy, namely that Jesus would not be God, but only a creature of God.

The Holy Fathers, saddened by the slap that St. Nicholas gave to Arius, took his omophorion of the archiepiscopate.

However, the Mother of God showed herself to one of the holy Fathers and commanded them to give him back his omophorion, for St. Nicholas’ ardour was pleasing to the Lord.

Since then, the icon of St. Nicholas has the Mother of God and the Lord Christ, giving him back the omophorion of the archiepiscopate.

Perhaps the mystery of his holiness rests on his ability to receive suffering. The suffering he gathered from others made his love more radiant. Suffering and love increase each other progressively in saints. This is why his heart was a sea in which all the tears and pains of the earth found comfort. I believe this is a mystery showing how saints become "lights of the world."

In fact, all the miracles which God did for people, after the departure of this saint from this world are explained by that they represent an answer God gives to people for their love of the great hierarch. For God is the doer of miracle in His saints, regardless of whether they are in this world or have moved into the other.

But the great miracle, one more and more rare among people, is precisely this heart-as-light, which God does not limit by the tomb. This is why God praises it with deeds beyond nature, honouring with them the memory of His beloved, namely the lovers of people – the saints.

God praises it with deeds beyond nature.

Let us praise it as well… at least with words! 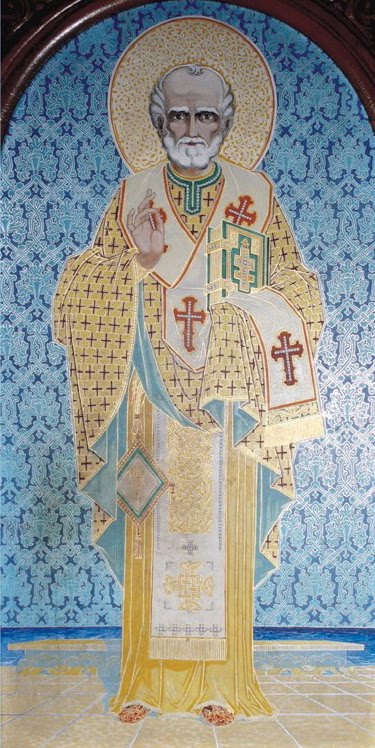