Only God could have said this parable; the human language could not contain in fewer words or in a simpler, more profound way the whole human tragedy over which He pours an ocean of love and wisdom.

We all recognize ourselves in this prodigal son who has fallen from the honour of being a son of God to the diminished "rank" of swineherd, whose soul is in tatters.

The father honoured the son's request for inheritance, although he could have had it as a gift. He honoured his son's gift of freedom, a freedom that enables man to achieve unimaginable heights of perfection, but can also lower him to the most terrifying level of moral disfigurement.

Leonardo da Vinci worked on "The Last Supper" - the most famous Renaissance painting - for 12 years. He searched for a model for Jesus for a long time. Finally, he discovered a young man, with a beautiful face, who was good, gentle, with a great soul, and radiating love: a worthy model of Jesus. He found the other apostles easier, except Judas. He had to express the pattern of distrust, the poison of envy, of unchanging narrow-mindedness, of meanness, and of the ability for betrayal.

He had started painting almost twelve years ago, when Leonardo discovered a man in Milan who looked exactly as he had imagined Judas.

He paid for it as a model and took it to the refectory of the Monastery, where he was painting "The Last Supper." He was a model for Judas: dark in the face and so in the soul, furrowed with passions; a volcano of hate and faithlessness. The painting was almost ready. There was a terrible unrest in the soul of "Judas"; he abruptly interrupted the painter and said: "12 years ago, when you were painting Jesus – I was your model!" Leonardo shouted: "Are you the same?!"

Further history does not tell us anything, but it is clear what happened...

We get tired of waiting for the return of a child, of a brother, of a drunken father, but God does not discourage. God follows you with His grieving love, in any country you may go. Love is like God: it has no boundaries. One of the Holy Fathers says it clearly: “Jesus follows all people, no matter of how far away they are running, to reach them and to bring them home. And He does that to the end of the world.” 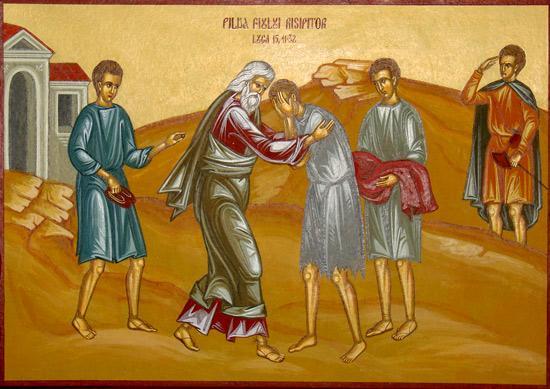