There are two kinds of people God called ‘fools’: those who “say there is no God” (Psalms 52:1), and those who are rich, for whom theirs god is the belly (Philippians 3:19).

Both embrace one and the same error: they deny any meaning or destiny for man or for the world, above this earth and its belly. To deny a supreme authority over heaven and earth is the same as to preach the authority of chance, chaos, or universal anarchy.

But the world is ordered. This shows that there is an authority beyond it. The mind that sees the world without a master is disordered.

The mind that thinks that there is no God falls into its own predicament: it will have to deny itself, because to fight with all one’s might against something that does not exist shows the insanity of this fight; it not only proves the nonsense, the absurdity, but also it shows the absurdity of the mind engaging in such a fight.

The second ‘fool’ is the rich man, who narrows the horizon of his existence to the size of his belly, even if his belly could swallow the earth.

Moreover, such a rich man will seek to persuade all others that this is the only goal in life. Such a concept about man and his ultimate destiny is indeed the midnight of the mind. This night will culminate with the man believing that he is “the god of his age” (II Corinthians 4:4). Thus, in such a benighted state of mind, when the rich man believes that the earth and the world will finally make him happy, he will lose his soul with thunder; his death will cast him down from the height of his riches. God does not allow an endless narrowing of man’s vision to his belly only, since man is destined for other horizons, namely those of God’s Kingdom, of his eternity, and of the deifying of the future era.

At the end of history, these two crazy people, the rich man and the atheist, will begin to fight, each wanting to be the sole master of the earth: one having the purpose to exploit all people for the raising of the golden calf, the other to expropriate God from His right of being Creator of the world.

The Luciferic plan of the latter is stronger than that of the former and ‘will win.’

There is a third category of people, those who “enriched themselves in God”, at whom Satan will come with an ultimate rage, wanting to extinguish, along with them, the memory of God on earth.

This is the final war with the saints, war which God will extinguish with fire, and the world will burn.

We should be rich in God: ponder Him, love Him, have communion with Him, force ourselves to think and love as He does in all situations of life.

This is true wealth, which will not be taken from us. 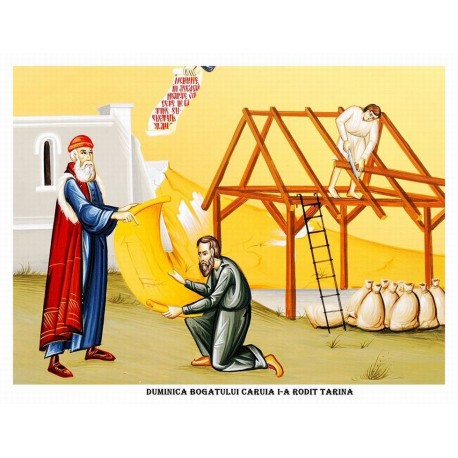