Today, 50 days after the Resurrection, the Revelation was completed.

Today people preached the Holy Trinity for the first time on earth.

The Holy Spirit, the third face of God, came from Heaven. “And suddenly there came a sound from heaven, as of a mighty rushing wind, and it filled all the house where they were sitting. Then there appeared to them tongues divided as of fire, and it sat upon every one of them. And they were all filled with the Holy Spirit […]” (Acts 2:2-4). And in the house the Holy Apostles and the Mother of God were united: the first assembly in the Holy Spirit. […]

The Holy Spirit founded the first Church In Jerusalem and the Church took on its mission immediately. All the nations present in Jerusalem were to hear the Word in their own languages ​​on that day, “and they were all amazed and marveled” (Acts 2:7). […]

But the day of the Descent of the Holy Spirit also means that humans leave off their human character and fear and enter into godly existence and godly peace.

Through His Descent, the Holy Spirit has erased the fear of human nature.

Power from above and tongues of fire were given to the people. From now on they spoke no longer of their earthly experience, but by means of the Holy Spirit.

The Divine Presence brings man into happiness, a supreme certitude that he actually pursues. Then there will be no power in the world that he fears, but not in the sense that, empowered, he is a danger to people.

Only in this way can be explained the miracle that 12 simple men who were convinced by divine evidence, defeated the Roman empire, causing a weaponless revolution as the empire had never before seen. They scoured the ends of the earth, facing all the dangers associated with the times and places they encountered. They won believers to God there, not only through their word and the life example they set, but also through their death, their last gesture, the most powerful one, of the spirit's victory over the materiality of this world.

Behold the kind of destiny that a man clothed with the Holy Spirit has: behold what a tongue of fire of the divine presence can do! […] 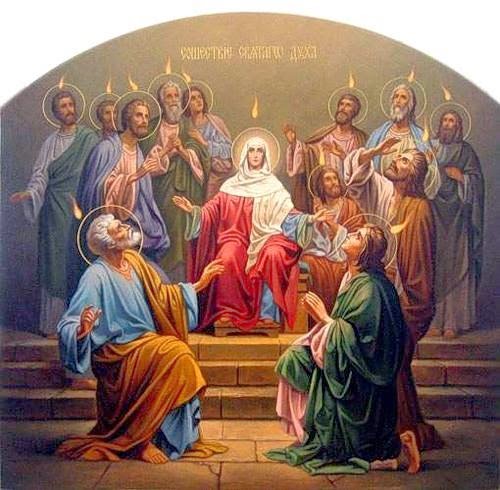