THE CANAANITE WOMAN … A woman crushed by her pain: she had a daughter who was possessed. A mind crushed by a single thought, the constant awareness of pain. Pain is not a healthy subject for meditation. You must get rid of pain, get over it, be above it. But there must be someone to take you out of your ever-tightening circle of torment. For your pain takes you in its vortex and closes you from all people and from any world. The pain seems to be an unending experience of hell. As your horizon become shrunken, more tightened by your pain, your anxiety is greater – and it can be greater than anyone else’s. This is the state of spirit of the Canaanite woman.

But Jesus seemingly passes by this tragedy: all tragedies yell at God, either praying to Him or cursing Him. Jesus pretends not to hear. “He answered her not a word.” But His disciples also asked Him to heed her, “because she cries out after us.” Jesus pretended He did not listen to them. But in the unseen realm, He was attracting the hopeless soul to Himself, and “she came and worshiped Him, saying, ‘Lord, help me!'

”Even when He spoke to her, Jesus pretended not to listen. Jesus responded in a narrow way to her narrowness: “I was not sent except to to the lost sheep of the house of Israel” and that “It is not good to take the children’s bread and throw it to the little dogs.” In other words, Jesus was showing the woman her sin, and He was encouraging her to go beyond it. And the woman snapped out of her narrow thinking and did not become enraged because she had been compared to a dog. When her eye saw more, when she moved from the narrowness of her pain to the limitless goodness of God, she saved herself at that moment.

God conducted this miracle in such a way that He healed the mother. And through her healing, her daughter at home was also healed. And Jesus was amazed saying: “O woman, great is your faith! Let it be to you as you desire.” And the Gospel adds: “And her daughter was healed from that very hour.” In a word, they all came out of their narrow circles to the larger horizon, which is the godly peace, that which heals any disease and soothes any storm of the soul. God responded to human prayer, the prayer of a helpless woman, and brought her nature into His peace, transcending her mental anguish and pain. 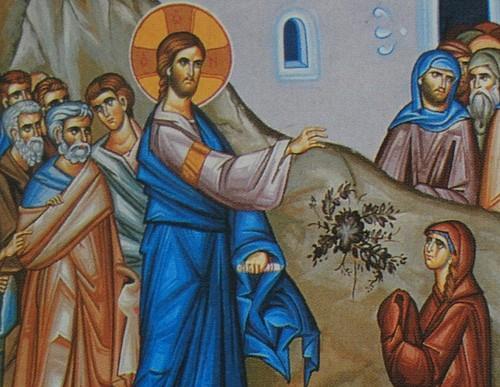